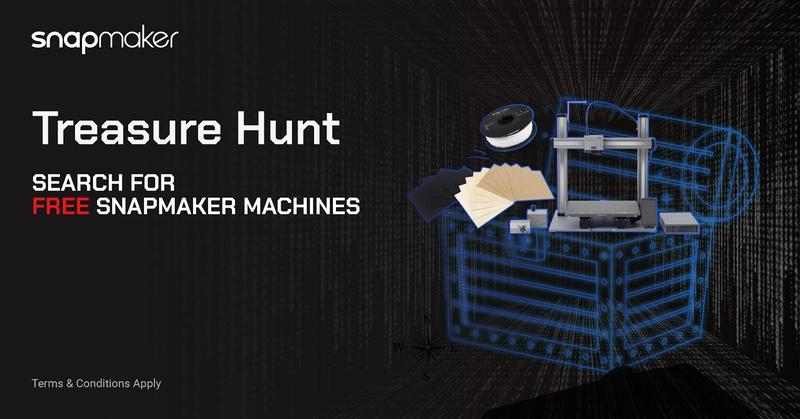 Launched off the back of the firm’s fifth anniversary celebration, the new Snapmaker 2.0 AT machines are the latest generation of the company’s modular 3-in-1 3D printers, while the Snapmaker 2.0 F models offer a more beginner-friendly version that provides greater flexibility to users.

Snapmaker has also launched a treasure hunt event on social media offering customers the chance to win free products, including the new Snapmaker 2.0 A350T and F350, in addition to the firm’s upcoming 10W Laser Module, due to be released on 19th November.

Improvements on the Snapmaker 2.0

Both the newly released AT and F models feature severable notable upgrades from the Snapmaker 2.0. While the firm’s commitment to modular design remains the same, the company has improved on a number of features to deliver an improved user experience and maximize the quality of the parts its customers create.

The first improvement made is to the machine’s power module. As Snapmaker admits, noise from its machines has long been one of the chief concerns of its customer base, and the firm has previously attempted to address this by introducing the Enclosure for the Snapmaker 2.0.

The firm is now taking a further step to fix the issue by integrating a much quieter fan into the power module in order to decrease the noise level by around 16 decibels. The fan also no longer runs at full speed constantly and instead works in response to real-time temperature.

The second upgrade applied to the new models is a newly-designed cooling system and quick-release hot end mechanism designed to improve printing efficiency and consistency. Snapmaker has optimized the printer’s motion controlling algorithm in order to improve on its layer missing issue during high-speed printing. According to Snapmaker, the upgraded cooling system helps the AT and F models to achieve the same printing quality at a much faster speed than its A models.

The third notable upgrade present in the latest 2.0 models is to its linear module, within which the company has embedded TMC2209 stepper motor driver chips in order to achieve an “ultra-silent” work environment during operation. The leads of the X and Y axes’ screw rods have also been increased from 8 mm to 20 mm without undermining accuracy.

With the above upgrades, the Snapmaker 2.0 AT and F models will reportedly maintain a noise level of around 50 decibels during operation.

The Snapmaker 2.0 AT models

According to Snapmaker, the A350T and A250T models are ideal for beginners who are just getting started with 3D printing, hobbyists who are seeking more customized options, and engineers and designers who are looking to print large objects or accurate parts with excellent print quality.

The machines’ interchangeable modules allow users to not only 3D print their creations but to also refine them further via laser engraving, cutting, and CNC carving. The printers’ modular design enables the toolheads and platforms to work in their own ways while sharing the same mounting positions and methods, meaning that changing functions on the A350T and A250T is quick and easy. 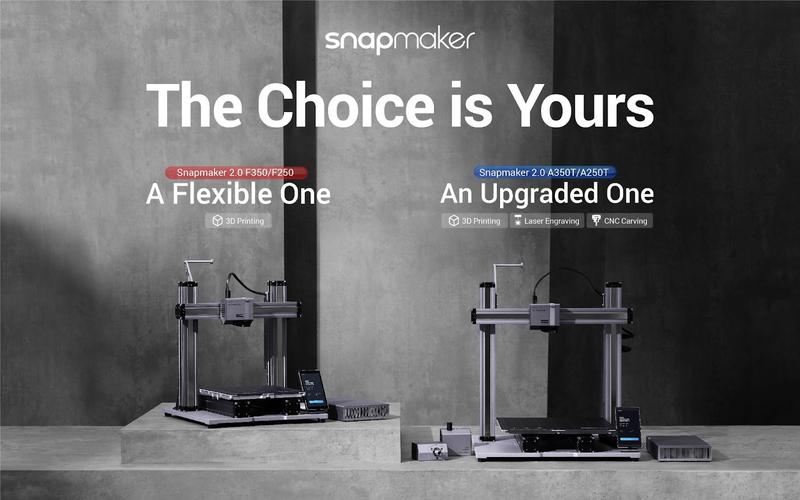 To allow the A350T and A250T models to support various modules and add-ons, Snapmaker has adapted the machines’ Controller Area Network (CAN) bus expansion. A specialized chip is built inside the controller to transmit messages, which enables easy modification and inclusion of additional ports and controls in the future.

To open up a wider level of applications, the AT models can be personalized with Snapmaker’s enclosure, rotary module, emergency stop button, CAN hub, and air purifier, with more add-ons slated for the future.

The A250T offers a work area of 230 x 250 x 235 mm, while the larger A350T is equipped with a 320 x 350 x 330 mm work area enabling users to create large prototypes or multiple smaller objects in one go. Both machines operate on Snapmaker’s tailor-made Luban software, which comes with a plug-in system and API to aid users to develop new features for their customized modules.

Modularity aside, the AT models’ 3D printing highlights include an auto-leveling feature for the print bed, a filament runout sensor, and an upgraded cooling system to improve printing efficiency and consistency.

The new Snapmaker 2.0 F models are pitched as more beginner-friendly versions of the company’s 3D printer offering and are designed to provide more flexibility in creation.

While the Snapmaker 2.0 F models only have a 3D printing function for now, the machines are expandable and can be customized into a 2-in-1 or 3-in1 3D printer in line with the user’s wishes. The F models’ cooling system and motion controlling algorithm have been upgraded to combine high-speed and accurate 3D printing of larger projects.

Also operating on Snapmaker’s customized Luban software, the F250 and F350 are equipped with a number of similar features of the AT models, including a 5-inch touchscreen with intuitive navigation, flexible print sheet, auto-leveling, WiFi connectivity, filament runout recovery, and power loss recovery.

To celebrate the launch of its newly-released Snapmaker 2.0 AT and F models, Snapmaker is hosting a treasure hunt on social media to give customers the chance to win a range of free products.

The products on offer include the firm’s new Snapmaker 2.0 A350T and F350 3D printers, and its upcoming 10W laser module, along with various material bundles. Participants can join the treasure hunt here, with winners due to be announced on the 11th, 18th, and 25th of November via Snapmaker’s social media accounts.