Selective Laser Sintering (SLS): How the Build Temperature is Affected by Thermal Diffusivity 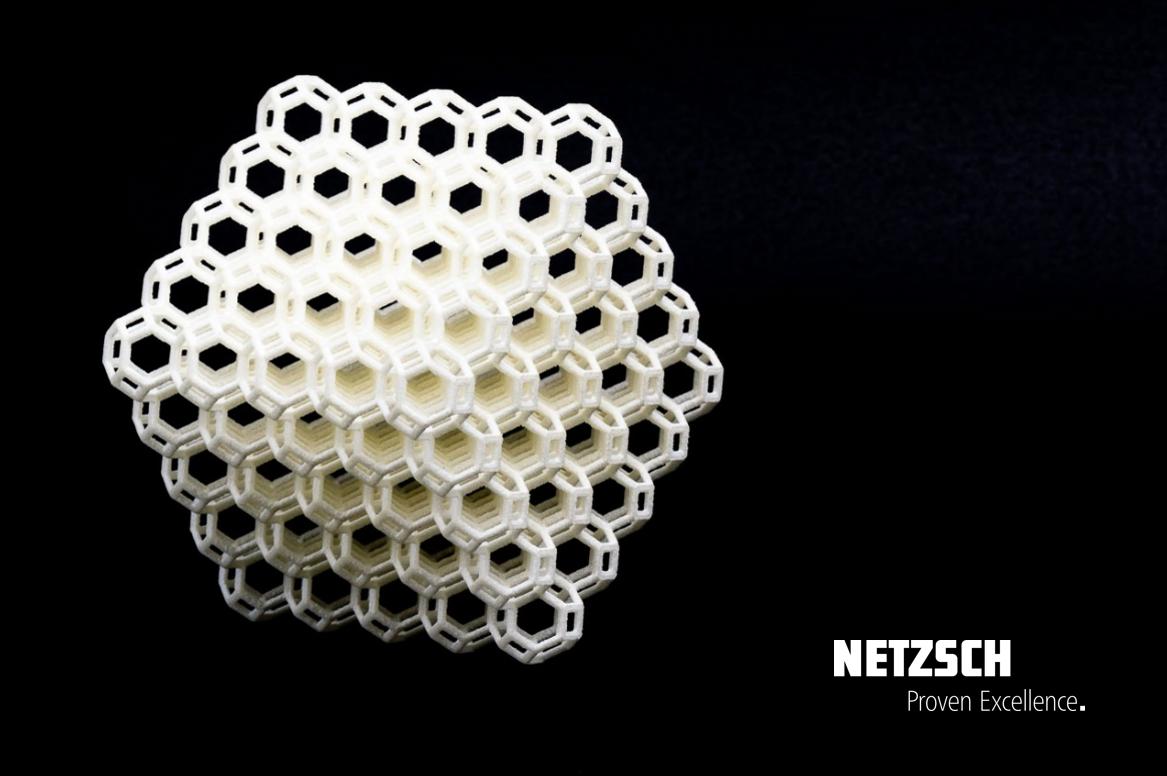 The various steps of sample preparation are also outlined, which are vital for the quality of the results.

The energy density of 0.043 J/mm2 was held constant for all materials to identify any changes in the behavior of the process as a result of the fillers. An experimental build temperature of 167°C was determined for the PA12/Cu spheres powder.

For the PA12/Cu flakes mixture, it was necessary to increase the build temperature to 173°C. The assumption was that an increased thermal conductivity and lower specific heat capacity could be the cause. Therefore, the following analysis can be employed to thoroughly examine such effects.

How to Analyze Thermal Diffusivity

At NETZSCH Analyzing & Testing, an LFA 467 Hyperflash® was used to evaluate the thermal diffusivity of the various mixtures of PA12 powder with copper particles in relation to the neat PA12 material.

A short light pulse heats the bottom surface of the sample, and, using an IR detector, the increase in temperature on the rear surface is measured as a function of time.

Once the sample temperature is stabilized, this is repeated for each temperature step, and the flash lamp is also fired numerous times over a period of minutes. The preparation of the samples is an extremely crucial factor which is detailed here.

Subsequent to loading the samples, the measurement is initiated under the conditions outlined in the following table:

The NETZSCH Proteus® software automatically provides an appropriate model to the measured data to facilitate the calculation of the half-times, Figure 1.

Figure 1. Example of detector signal as a function of time at 25°C with the fitted curve (red) for the sample with 5 vol% Cu spheres. Image Credit: NETZSCH-Gerätebau GmbH

Figure 2 exhibits how the thermal diffusivity as a function of temperature and sample orientation for the neat PA12 is analyzed in contrast to the PA12/copper sphere mixtures.

As anticipated, the neat PA12 samples display no directionality, and the thermal diffusivity values are minimal. They display a general decrease with increasing temperature up to the melting temperature.

This is a result of the copper’s higher thermal diffusivity in contrast to the insulating matrix. For a majority of the samples, no directionality is noted due to the sphere’s isotropic properties. 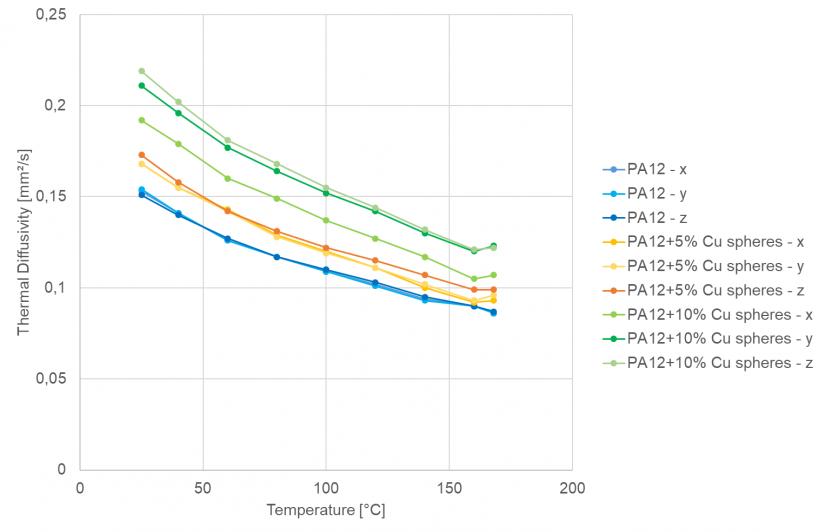 Yet, the thermal diffusivity is marginally lower compared to the other two directions for the sample with 10 vol% Cu spheres in the thickness direction z. It is possible that this is due to the greater porosity of these samples, which was recorded by Lanzl et al.[1]

The LFA results signal a higher porosity between layers in the z-direction than a layer in the xy-plane.

Figure 3 shows observations of a different behavior with the copper flakes; here, a comparison of the thermal diffusivity measurements of all samples in the x-direction and of the flakes in all three directions was performed.

The flakes display much greater values for the thermal diffusivity in relation to the other mixtures with spheres and the neat PA12. A high degree of anisotropy was anticipated based on the 2D character of the filler.

The greatest thermal diffusivity is recorded in the y-direction followed by the x-direction. Through the thickness of a layer in the z-direction, the lowest values are achieved. This signals a higher preferential orientation in the xy-plane, which is potentially as a result of the powder application process.

Figure 4 displays a microscopy image of the cross-section of a single layer of the PA12/Cu flake mixture as recorded by Lanzl et al.[1]The image displays that the particles are in contact with each other, which means that the overall thermal resistance of the material (or, here, cross-section) should be reduced to a minimum.

Most of the fillers are aligned horizontally, which relates to the xy-plane. However, it can be observed that some flakes are tilted at an angle, which, when compared to all other samples, results in higher thermal diffusivity in the z-direction.

Thermal diffusivity measurements offer considerable insights into both the orientation of the fillers and their proximity to one another without the necessity for additional optical imaging.

How to Determine the Thermal Conductivity

Both the specific heat capacity and thermal diffusivity are determined as a function of temperature. The measurement and results of the cp–measurements are detailed here.

Employing the buoyancy-flotation method with water, the density at room temperature was assessed: using a Thermomechanical Analyzer (TMA), the thermal expansion coefficient (α) is measured, which will be explained in a later article.

The coefficient of expansion is direction-dependent and is calculated as follows:

Figure 6 exhibits how the resulting computed thermal conductivity values are plotted as a function of temperature for the various materials and mixtures.

The same trends as observed with the thermal diffusivity are seen:

For the application of such conductive fillers in thermal management, it is critical to modify the position of the 3D-printed parts to account for any anisotropy because of the coating process and filler geometry.

The higher thermal conductivity and the lower specific heat limit both lead to the reduced capability of heat storage in the compound and discharging of the heat, specifically in the xy-plane, where the highest conductivities with Cu flakes were acquired.

It is anticipated that the energy input from the laser is distributed more rapidly, resulting in a lower temperature. Thus, increasing the build temperature counteracts this effect. For a greater understanding of the influence of the various filler shapes on the energy input, Lanzl et al. examined the thickness of a single layer.

It was discovered that the layer thickness of the mixture with Cu flakes is considerably thinner. The researchers attributed this to the fact that the thermal conductivity in the xy-plane was greater than the thickness direction and to the increased diffuse reflection of the laser, which gives rise to lower energy input.

The supplementary analysis shows how critical it is to understand the changes in thermal diffusivity and conductivity for all the features of the SLS process while also knowing the most appropriate process settings.

This information has been sourced, reviewed and adapted from materials provided by NETZSCH-Gerätebau GmbH.

For more information on this source, please visit NETZSCH-Gerätebau GmbH.