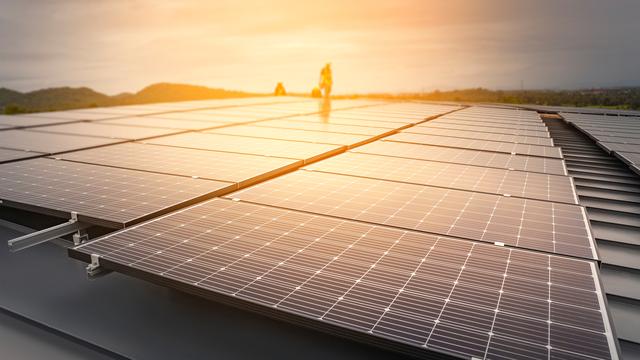 An artist's impression of the record-breaking nanocrystals, with sulfur atoms in yellow, and the bismuth and silver atoms in blue and red.

An international team from Imperial College London, ICFO and UCL have found a novel technique to enable record-breaking efficiency in solar cells.

Silicon-based solar cells are currently one of the most efficient systems in generating electricity from sunlight, and these are typically seen on rooftops and in solar farms. However, their fabrication can be expensive and energy-demanding, as well as being heavy and bulky. Lower-cost thin-film solar cells are an alternative. However, they are often composed of toxic elements such as lead or cadmium or scarce elements such as indium or tellurium.

We have produced an ultrathin material with the strongest light absorption of any solar cell material currently being studied. Seán Kavanagh Co-first author

AgBiS2 nanocrystals have emerged as a promising new material for ultrathin solar cells in the search for new technologies. Consisting of non-toxic, earth-abundant elements produced in ambient conditions at low temperatures and with low-cost solution-processing techniques, AgBiS2 nanocrystals can be integrated into ultrathin solar cells and prove to be very stable, avoiding degradation of the cell over long periods.

Due to these desirable properties, bismuth-based solar materials like AgBiS2 have been intensively studied by researchers for over a decade, with the aim of developing a low-cost, high-efficiency solar cell. However, they have struggled to achieve efficiencies greater than 5%, with scientists beginning to lose hope that these solar materials could succeed.

Now, however, an international team from Imperial College London, ICFO and UCL have found a novel technique that achieves a record-breaking power conversion efficiency in an ultrathin material to over 9.1%, putting these materials back in the spotlight for low-cost, high-efficiency solar cells.

Seán Kavanagh, co-first author and Research Postgraduate at Imperial’s Department of Materials and UCL, commented: "We have produced an ultrathin material with the strongest light absorption of any solar cell material currently being studied."

To achieve this exceptional performance, researchers initially created a theoretical model of this material, from which they predicted that controlling the distribution of silver and bismuth atoms in the nanocrystals could enhance the absorption and hence efficiency of the cells. Following this, they engineered a layer of nanocrystals in the cell with an unconventional approach called 'Cation Disorder Engineering'. 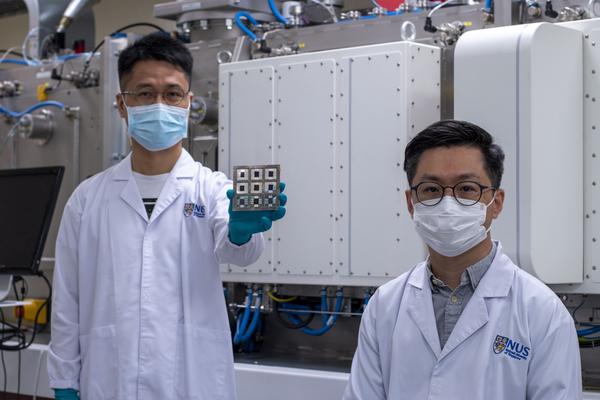 Cation Disorder Engineering is a process that involves heating the material to 150°C after to allow the silver and bismuth atoms to redistribute to be more evenly spread throughout the nanocrystals, giving stronger absorption of light which is an important property for a good solar cell. By depositing the AgBiS2 nanocrystals layer-by-layer, the researchers built a device 100 times thinner than current commercial solar cells.

Upon illuminating the device under artificial sunlight, researchers found that their ultrathin AgBiS2 material could convert power at an efficiency of 9.1% - breaking the current record of 6.3%.

Through applying different annealing temperatures and achieving different cation distributions in the crystalline arrangement, the researchers also demonstrated that AgBiS2 - a semiconducting material - had an absorption of 5-10 times more than any other material currently used in solar technology.

The recent findings bring research a step closer to developing highly efficient and extremely thin solar cells that can be used in various everyday applications.

Seán Kavanagh added: "The combination of low cost, non-toxicity and good efficiency, as well as its ultrathin structure, means that AgBiS2 could support a revolution in solar power.

AgBiS2 materials are ideal for solar devices in everything from windows to car roofs to clothes, as they are easily 3D printed. They are so flexible and extremely thin that we wouldn’t even notice them."

A bright future ahead

Our findings give hope that disorder can be controlled and that efficient solar energy conversion is possible. I expect to see a more diverse range of commercial solar cells in the near future.”

The complete publication can be read on Nature Photonics.

This news article was adapted from a press release by the ICFO.

Tags:  can you 3d print a solar panel