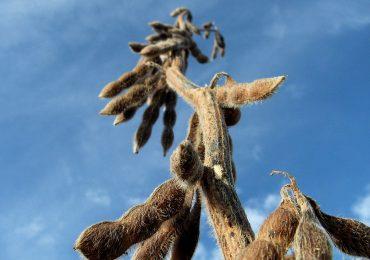 A team of researchers from Nanyang Technological University Singapore (NTU Singapore) and Waseda University has trialed the use of soybean waste to reduce obesity in rats.

The researchers found that fermented soybean waste, or okara, has the potential to improve fat metabolism and mitigate the effects of diet-induced obesity, while also addressing issues of food waste.

Alongside the trial, the team successfully formulated okara into an eco-friendly 3D printable ink, which they say could pave the way for food 3D printing to improve food sustainability.

“Our findings suggest that fermented okara could help mitigate the harmful effects of a high-fat diet, and could potentially be integrated in the diets of obese patients who find it difficult to make immediate lifestyle changes,” said Dr Ken Lee, Senior Lecturer at the NTU School of Physical and Mathematical Sciences.

Okara is a major by-product of soymilk and tofu production, and despite retaining abundant nutrients after the production process, is often under-utilized. With around 14 million tons of okara is generated every year, the researchers identified an opportunity to solve both issues of food waste and obesity in one go by releasing the ingredient’s untapped nutrients.

To enhance okara’s nutritional profile, the team fermented okara collected from a Singapore-based beancurd manufacturer using a typical process used to make fermented soybean food products such as miso, soy sauce and tempeh. The researchers added a mix of food-grade microbes, namely Aspergillus oryzae and Aspergillus sojae, to okara and left it to ferment for four days.

After the fermentation process, the scientists found the okara had more protein, higher antioxidant properties, and less insoluble dietary fiber. 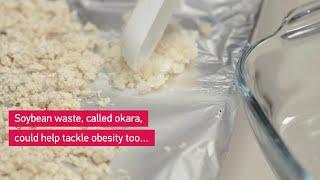 The mice on the fermented okara diet also saw a reduction in triglycerides due a significant dip in proteins involved in fatty acid synthesis. According to the researchers, their findings demonstrated okara’s potential to suppress diet-induced obesity.

Working with partners in Singapore, the team has successfully converted fermented okara into an eco-friendly 3D printing ink that could be used in food 3D printing to improve both food waste sustainability and the health of consumers. The team announced the development in January, with the approach based on the direct ink writing process that is novel in that it requires no thickening agents whatsoever.

The researchers are currently reaching out to industry partners to produce healthy snacks with their okara-based 3D printing ink, and explore how okara can be integrated into other food products.

“Aspergillus oryzae and Aspergillus sojae, which are typical aspergillus fungi used to produce soy sauce and miso, were successfully combined to ferment okara,” said Dr Shigenobu Shibata, Professor at the Waseda University Graduate School of Advanced Science and Engineering. “Compared to unfermented okara, fermented okara was found to be able to reduce obesity and improve abnormal lipid metabolism in mice. Tofu and soymilk are now widely accepted as health foods not only in Japan but in the world, and the effective use of okara, which is an industrial waste, is in line with the United Nations Sustainable Development Goals.

“I hope NTU and Waseda University, each with their unique strength, will continue to promote such joint research centered on graduate students and young researchers.”

The NTU and Waseda team is not alone in exploring how food waste can be repurposed for various applications, in line with circular economy principles. In particular, waste from the soybean production process has proved suitable for a wide range of 3D printing applications in the past, including within the construction sector.

Soybean waste has previously been used in the formation of new edible plant-based gel materials that can be 3D printed to form meat-like foods by researchers at Zhejiang University, for example, and by the University of Louisville to form 3D printable lightweight natural fiber composites.

Tags:  what materials can be 3d printed