Is the 3D Printing Market Consolidating? 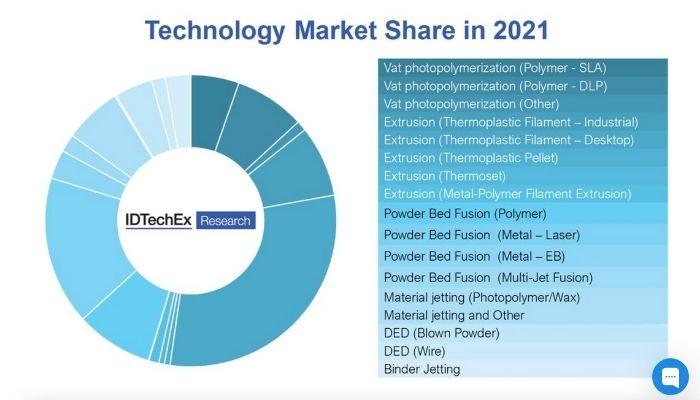 Over 2021, we saw a flurry of mergers and acquisitions throughout the additive manufacturing industry. It seemed that the industry was maturing and consolidation would continue, especially into 2022. However, a recent report from IDTechEx suggests this might not actually be the case. In 3D Printing Hardware 2022-2032: Technology and Market Outlook, written by Sona Dadhania and Dr. Richard Collins, the authors suggest that contrary to expectations over the years, the 3D printing market has not yet consolidated and possibly will continue not to due to extreme expansion of the market, especially when it comes to innovative technologies and new companies.

IDTechEx does acknowledge that in 2021 there were a number of mergers and acquisitions suggesting consolidation in the industry. Going over the history of the industry and the expectation of consolidation, the company commented, “In the 2020s, a recent flurry of mergers and acquisitions have brought 3D printing observers to again expect the market to consolidate in the near future. In 2021, IDTechEx noted well over 40 mergers or acquisitions taking place in 3D printing, which seems to support that claim.” However, in the report, the company suggests that even if there has been consolidation, it is not enough to counter the expansion that has also dominated the market throughout 2021.

The technology market share in 2021 between seventeen technology segment. Increasing innovation and more 3D printing technologies are both pointed to by IDTechEx as reasons why we cannot say the AM market is consolidating (image source: IDTechEx)

According to the authors, you can consider that the additive manufacturing market is not consolidating based on two driving trends in the industry, namely innovation and investment. This may seem counter-intuitive because both of these trends are crucial to the success of a market, yet apparently they are also preventing it from consolidating like many other healthy markets have done in the past. But for IDTechEx, both investment and innovation are driving growth which is also bringing in new companies, even as some of the more establish ones consolidate. This factor contributes to expansion of the market overall. 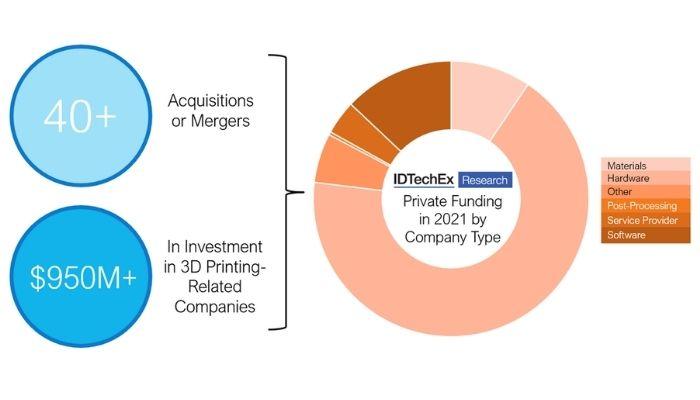 For investment, as can be seen in the graph below, the report claimed that the market could not be considered to be consolidating due to the increased funding, namely with publicly announced investment in 3D printing companies amounting to $950 million over the course of 2021. They also noted the increased presence of startups as well as established companies moving into the 3D printing market as it proved to be profitable. And though the graph shows that most investment was in hardware, it is clear that investment is driving change throughout the AM pipeline, with materials, post-processing, service providers and software all receiving a chunk of the investment, even if together it amounted to about a 1/3 of what was given to hardware companies.

Innovation has also been driving expansion in 3D printing. This is because innovation is leading to the creation of more and more technologies, allowing even more companies to join the market. For example, IDTechEx points to Azul3D, Holo, Xerox, Massivit3D, and Evolve Additive Solutions who have entered into the market with proprietary technologies that offer something new to the industry. The article also names certain 3D printing technolgoies that have evolved over 2021 as they gained in prominence, notably multi-material printing, bound metal extrusion (BME) and bound ceramic extrusion (BCE).Also noted, is the increased presence of pellet 3D printers as well, a trend that became clearer as more FDM manufacturers have offered extruders adapted to pellets or hybrid machines that could process both. This innovation, though necessary for an industry like AM, also means that the market is rapidly expanding due to the influx of new companies. It also seems that this trend will continue in this year as IDTechEx points to the innovation also in academic circles which will continue to push change in the sector.

Still it does remain to be said that even with all this expansion, consolidation is clear in the market. Yes, there is increased investment and innovation has pushed more companies into the market as they create new 3D printing technologies to compete. However, within the technologies themselves, it is clear that consolidation is happening. For example, in binder jetting the acquisition of ExOne by competitor Desktop Metal will potentially give the merged company dominance over the majority of the market for many years to come. It would make sense that this could continue to happen over this year. But whether that suggests true consolidation is up to interpretation. However, you can find more information about the report in IDTechEx’s article HERE or download it directly HERE.

Do you think the 3D printing market has been consolidating? Let us know in a comment below or on our Linkedin, Facebook, and Twitter pages! Don’t forget to sign up for our free weekly Newsletter here, the latest 3D printing news straight to your inbox! You can also find all our videos on our YouTube channel.

Tags:  what does a 3d printer pen do