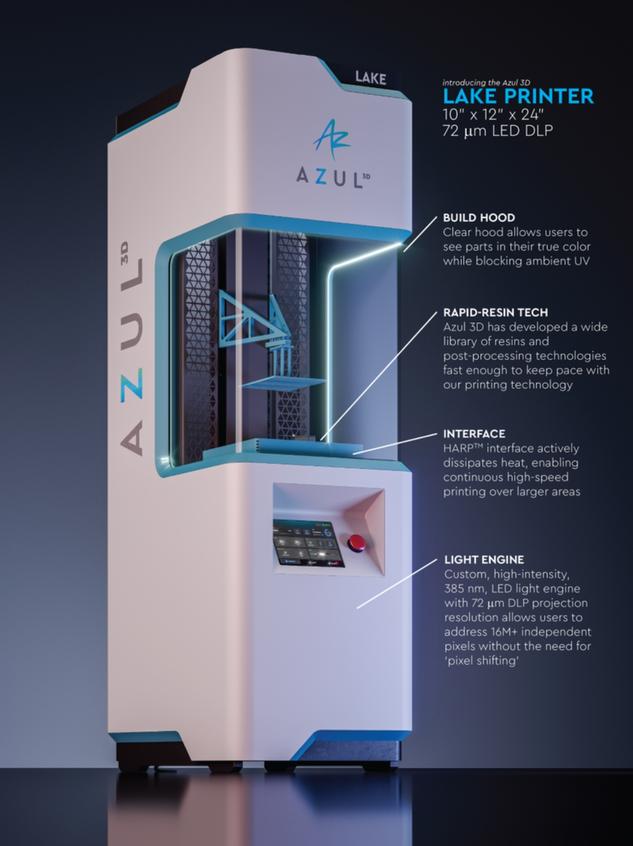 After a good deal of research and development, followed by funding and the arrangement of its advisory board, Azul 3D has finally launched its first commercial 3D printer. A first-of-its-kind for the industry, the LAKE printer will make it possible for users to produce large-scale photopolymer parts very quickly.

The LAKE system is the first to utilize Azul 3D’s high-area rapid printing (HARP) technology, a digital light processing (DLP) system that relies on an LED light engine to cure large swaths of material at a time. The system boasts a 10” by 12” by 24” build volume and the ability to direct light at 16 million separate pixels at once, without the need for the “pixel shifting” process using in other DLP printers.

“The LAKE printer will be game-changing for 3D printing,” said Chad Mirkin, Azul 3D co-founder and chair. “For the first time, we are combining throughput and materials at a price point that enables 3D printing to revolutionize many types of manufacturing. We have raised the bar in the industry, and this is just the beginning.”

Azul 3D is a Northwestern University spinout, with the technology developed in the lab of Prof. Mirkin. When HARP was initially unveiled, the machine was 13 feet tall and could produce parts 20 times the size of traditional DLP methods at a rate 100 times faster. In contrast, LAKE’s robust build volume actually seems somewhat modest. In fact, Azul 3D has already hinted at a future printer with four times the print area, dubbed SEA. 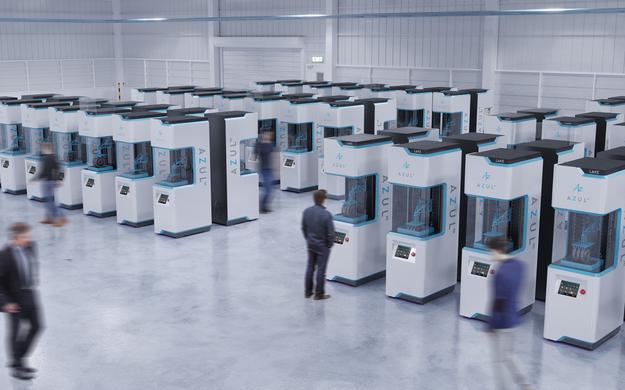 The LAKE printer is the first in a series of printers that Azul 3D will unveil in the coming years. The next generation printer, called the SEA, will offer four times the print area, allowing manufacturers to print even bigger parts or products.

What makes HARP able to produce such big parts so quickly is that is uses a specialty oil to minimize adhesion to the build plate, where other firms like Carbon rely on a “dead zone” that can result in excessive heat. In turn, not only is HARP faster, but it can print with a wider variety of materials, including oxygen-sensitive and -insensitive chemistries.

A rendering of LAKE 3D printers on a factory floor. Image courtesy of Azul 3D.

The company has demonstrated its technology so far by 3D printing 5,000 face shields in 60 hours for healthcare workers, as well as producing customizable pickleball paddles for Wilson Sporting Goods. Now, Azul 3D is ready to offer end-to-end solutions tailored to a given customer’s manufacturing environment. This includes design, materials, printing and post-processing.

“In the past year, manufacturers have been throttled by supply chain disruptions,” said Cody Petersen, CEO of Azul 3D. “At the same time, everyone is demanding more highly engineered solutions immediately. The LAKE printer offers a revolutionary solution to both problems and is the first step in industrializing additive manufacturing at scale.”

Pre-orders are now open for LAKE, with delivery expected in 2022. Pre-orders for SEA will be open in Q4 of 2022. To learn more, contact [email protected].