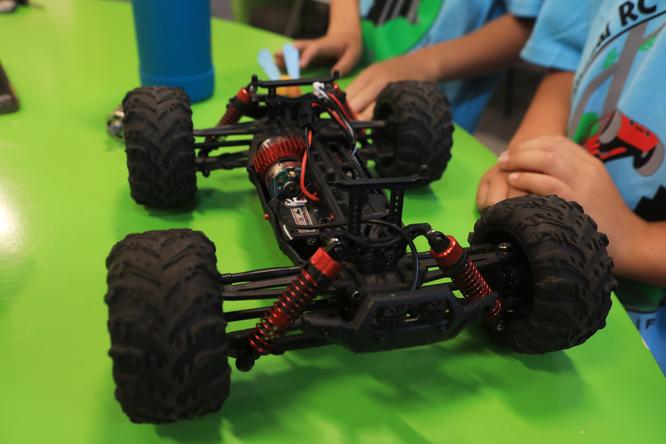 For its keystone event, though, children are able to take out their creations for a day of racing.

60 teams and around 160 children grades K-12 will compete in the Fab Lab's 2022 RC Custom Car Open starting April 1. The race teams have spent months designing and creating race cars out of materials at the lab.

The weekend events start with a design competition before the big race on April 2.

But the big race is final stage of months of planning, preparation and passion for the young racers, the high schoolers who put together the event and the adults who oversee them all.

"Race day is exciting but it's really more than that," Faulhaber Fab Lab Director of Marketing Jenn Sams Scott said. "It's a culmination of months of work. It's more a program than an event. … It realizes the potential that (kids) can bring any idea to life."

Teams begin with identical basic remote control cars and from there exercise free rein to build a design on top of the shell.

Team Targa, composed of Pine View School students Vinicius Sena Barney, Avi Snyder and Liam Snyder,are focusing on their car's aesthetics two weeks out from the race— the trio have turned their RC car into a jungle showcase with tigers, bumblebees, 3D-printed foliage and more.

It's the trio's first crack at the tournament. Much of their weekend work at the lab has been at tables near the smashed and broken shells of past year's race cars. The small graveyard of makeshift machines weighs heavy on Vinicius Sena Barney in the week's leading up to competition.

"It's a reason I'm anxious not to lose the race," Barney said. "We don't want our car to end up (damaged)."

Team Targa has put its car together and has thought about who will drive it come April 2. 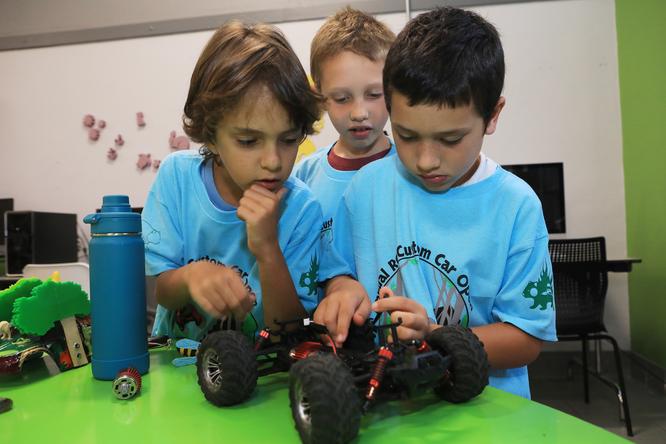 "We had a team meeting and made plans," said Liam Snyder, 8 years old. "We did a test drive and Avi was the best."

Snyder will race their car on the big day, and is feeling exciting about the chance. He's just looking forward to shoot his team's car high into the air off some ramps.

Team TouCannons — originally named after a Toucan by members Nikolas Eckert, Sam Li and Noah Hoff — created a tiger car that they've been practicing with each weekend. Nikolas Eckert, 11, raced in last year's competition and wants to do better this year.

The racers have the right heart, but what's passion for racing without a racetrack to contain it?

The student executive committee handles that, just as they handle just about every other part of the race. The theme, the layout and construction all fall on the high school students that volunteer their time to make it happen.

Emre Muessemeyer, a 17-year-old Pine View School student, is working through his first year as a committee member. He admits he hadn't had much workshop experience before volunteering at the lab, but that's changed since he started in September.

Muessemeyer has put hours into a large axe pendulum structure, spending several hours a day over the last couple weeks carving the pieces out of foam with a laser cutter and hooking up the wiring to have the axe swing back and forth as part of the race's start gate.

Seeing his idea for a pendulum turn into something real has given Mussemeyer a sense of satisfaction.

"It started as a silly idea and now we're actually going to hit the cars with this axe," Mussemeyer said.

The Faulhaber Fab Lab staff has to keep a wrangle on the many energies and ideas that fill the lab each weekend.

Lab manager Eric McGrath, Scott herself and other adults in the room all take shifts at the lab to handle the fabrication technology and keep watch over the many hyper children in the lab.

"Our committee has 19 students, more than we've ever had before," Scott said. "It's almost like herding cats."

One of her biggest prides, though, is seeing students that started off as young racers grow up and join the planning committee to help the next generation.

"It's a beautiful, full-circle moment," Scott said. "Over half of our committee were past racers."

Tags:  what is the biggest thing 3d printed