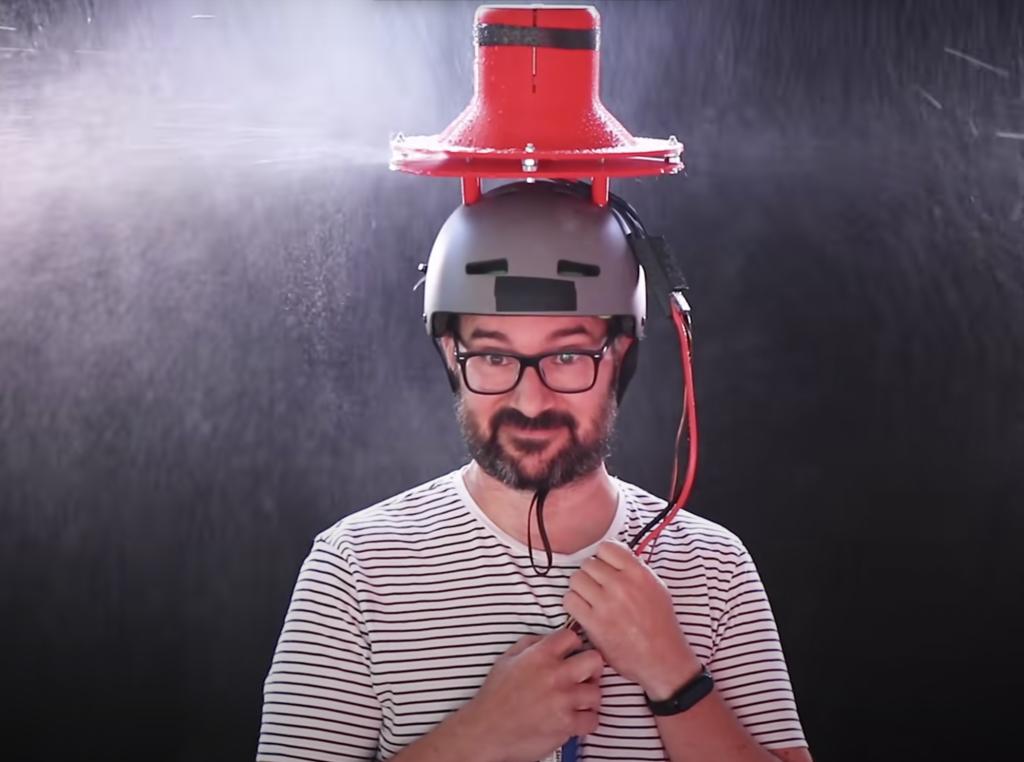 Voting shortlists for the 2021 3D Printing Industry Awards are now open. Who do you think should receive top honors this year? Have your say now.

Built as an alternative to old-fashioned manual umbrellas, Miranda’s high-powered headgear features a brushless motor-powered 3D printed impeller, which creates an ‘air disc’ that simply blows rain away. After wet weather testing, the Youtuber declared he would’ve been “more wet with an umbrella,” but conceded his device was “dangerous and noisy,” making it more monsoon than high street-ready.

“I made a hat that keeps me dry in the rain, I think we’ve been stuck in the umbrella ages for too long, so I wanted to give it a go to improve it,” explains Miranda, in the description alongside his video. “It certainly can protect you from the rain, although it is super loud and not very practical.”

The turbine hat: a load of hot air

In keeping with the popular Youtuber’s wacky approach to inventions, he has now declared that “we can do better” than basic traditional umbrellas. Designed to keep him dry during the rainy season in his Spanish home town, Miranda’s hat is based around the idea that hot air can be used as a substitute for shelter, to push rain away from its wearers instead of shielding them from it.

While the device has gone through three iterations, each is fairly similar to the Youtuber’s first, on which he tested several impeller blade and inlet sizes, to see which pushed most air outwards. Initially, Miranda’s resin-printed impeller proved neither flat or straight enough, but eventually he was able to develop a system that kept the area next to it dry, so he attached it to a cycle helmet for user testing.

Due to the fact the impeller wasn’t balanced, the Youtuber said his invention was “vibrating his head,” so he tapped out and instead began experimenting with his device on a less delicate mannequin head. However, the impeller’s vibrations still allowed it to shake itself loose, causing a nut to fly off and the motor to begin unfastening itself as well. 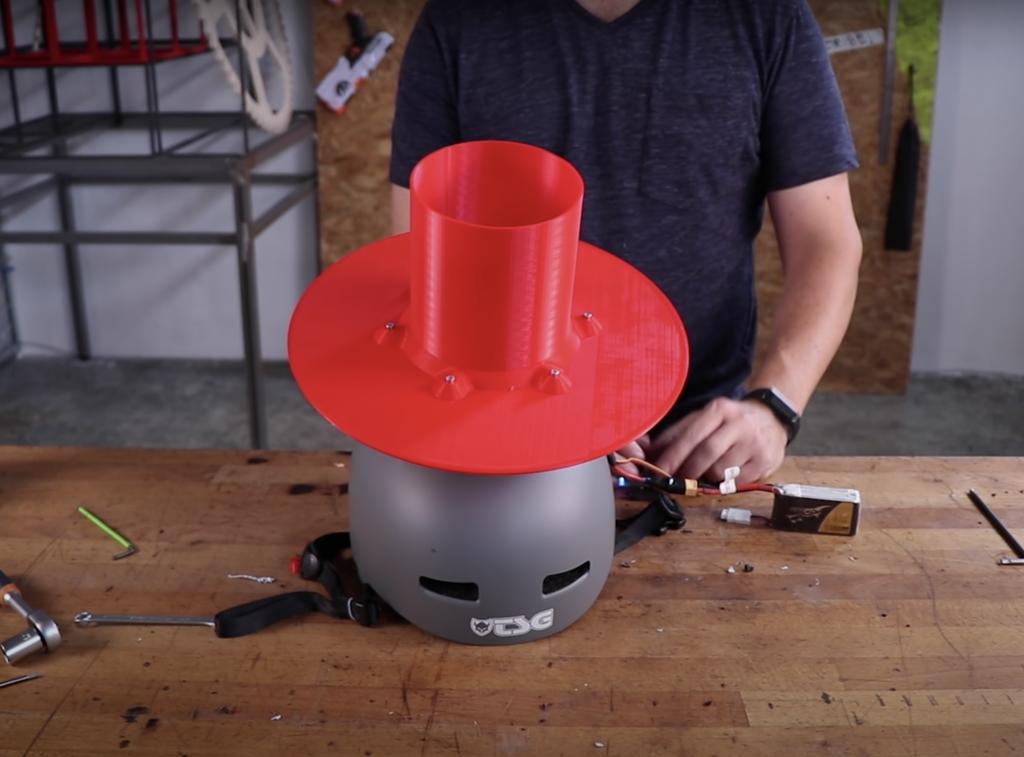 As ever with Miranda, he had the solution: fitting his umbrella hat with even more power. To accomplish this, he swapped in an Electrical Ducted Fan (EDF), the likes of which feature a multi-bladed fan and high-power-density motor as well as an overall shroud, and are often used to power UAVs and miniature jets (I mean why wouldn’t you put that on your head?)

Once he’d fitted his umbrella hat with an EDF, Miranda strapped it to a test dummy again, letting out a maniacal laugh (as you do), before subjecting it to more wet weather testing. This time, the system kept the area directly around it completely dry, without shaking itself or the model’s head to pieces, leading the Youtuber to declare “this may work!”

As a final test of the umbrella hat V2, Miranda then strapped the helmet on himself and stood under a gantry-mounted hose system, to simulate rainfall. The Youtuber still felt water “coming from behind and from the sides,” but he was able to identify the fan’s area being smaller than the rest of the device as being responsible, given that it created a ‘low-pressure area,’ causing water to deflect back onto him.

To rectify this, he redesigned the headgear once again, to ensure that it was able to maintain a high-pressure area of air around him, resulting in ‘umbrella hat mark three.’ When worn in one final test, in which Miranda subjected himself to a deluge of water, the revised model was able to keep him dry, although at the cost of his ear drums as well as a rather lengthy cleanup of his now very wet workshop.

Innovation on the web

Youtube’s creator community continues to use 3D printing to create weird and wonderful solutions to problems that we didn’t know existed. Last month, Youtuber electrosync 3D printed a ‘bevvyboat,’ that allows users to transport tasty snacks and beverages across swimming pools, without ever having to get out.

In gaming-related applications, YouTuber Akaki Kuumeri has designed and 3D printed an Xbox joystick attachment for his Series X/S controller, that turns it into a fully-functional flight stick. Produced using a low-cost FDM system and flexible filament, the device is designed to provide users with a cost-effective way of realistically playing flight simulators.

Elsewhere, Tech YouTuber Integza has taken his inventions to an explosive new level, by used 3D printing to develop a low-cost rocket engine inspired by an old Nazi design. Powered by a chemical reaction rather than burning fuel or combustion, the engine was ultimately tested in his backyard, without blowing it to smithereens.

Tags:  how much does it cost to 3d print a helmet