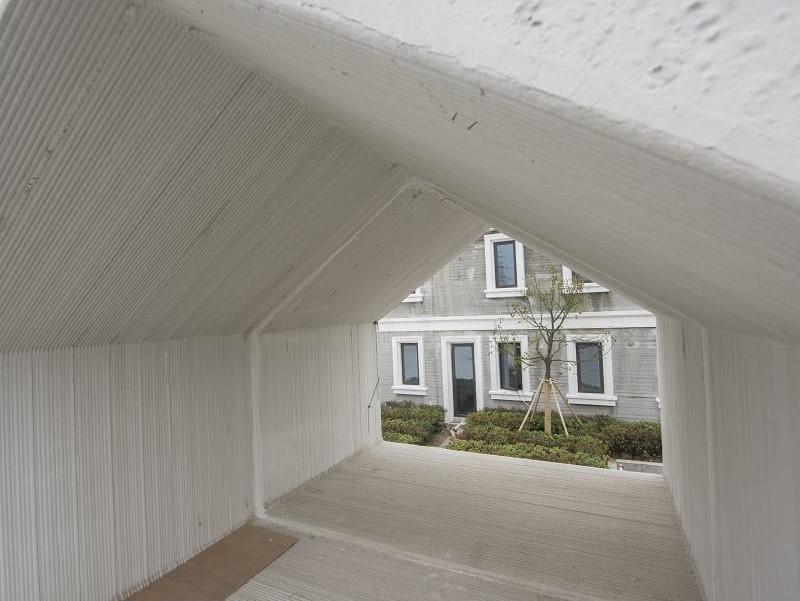 The five-acre site in Rancho Mirage could be located anywhere in the Coachella Valley’s infinite sprawl: a vacant lot dotted with creosote and sagebrush, ringed by box stores and strip malls, with eight golf courses within a three-mile radius. But the corner of Ginger Rogers Road and Key Largo Avenue, just ten miles east of Palm Springs, has gained worldwide attention as the location of the “world’s first 3-D-printed zero net energy community,” where a developer plans to plop 15 freshly printed homes into the Southern California desert, and potential buyers have, reportedly, already plopped down deposits for three-bedroom, two-bath homes starting at $595,000 (two paid in bitcoin).

The homes are being printed in big pieces at an Oakland warehouse by Mighty Buildings, a startup that’s one of a handful of companies hoping to use 3-D-printing technology to revolutionize the construction industry. Mighty claims it can print a 350-square-foot studio — often used as an ADU, or accessory-dwelling unit, the backyard structure you may know as a guest house or “granny flat” — in less than 24 hours, and on a time-lapse video, you can watch as a zippy robotic arm manifests the building practically out of thin air, laying down layers of polymer composite in a latticework that’s cured under an ultraviolet light, then pumped full of drywall for insulation.

They’re not the only so-called 3-D printed homes on the proverbial block. Another company, ICON, which claims to have built the “U.S.’s first 3-D-printed homes for sale,” in Austin, Texas, produces its buildings slightly differently by bringing its 3-D printer to the construction site, where it extrudes a cement mix it calls “Lavacrete.” ICON puts up its houses in five to seven days, in a truly mesmerizing process of piping concrete into layers like cake icing to create walls that are then topped with a roof made from other materials, more or less like any other house. 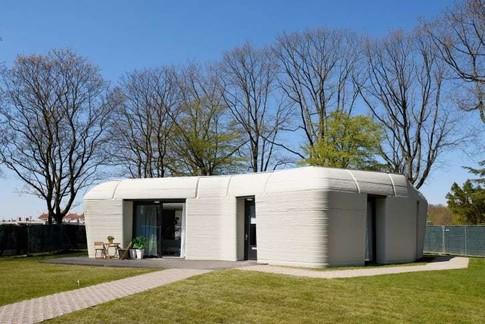 To call either of these final products a 3-D-printed home is a bit of a misnomer. What Mighty is 3-D printing is a structural insulated panel that still must be assembled using conventional methods, whether it’s in a factory or onsite. What ICON is 3-D printing is really only those concrete walls; the rest of the interior and entire second story is all conventionally wood-framed. They both still require foundations. Both companies claim that robotics and automation can cut costs, speed up development, eliminate waste, and reduce emissions compared to traditional building methods. Mighty, for example, claims “near-zero waste production process” and “savings of 2.3 tons of CO2 emission per 3-D-printed home.” But as Lloyd Alter demonstrates at Treehugger, the panels are made from polyurethane, which, as a material, has extremely high embodied carbon, even if it’s offset, as the company claims, and it still needs to be mounted onto framing — in this case, steel. All that tempers the sustainability claims quite a bit, he argues, because it results in a particularly unsustainable end product: a “foam and plastic sandwich made entirely of non-renewable materials.” You end up with a “zero net energy” house, perhaps, but one that’s made mostly out of petroleum with the same old carbon-intensive steel frame.

What Mighty is really offering might more accurately be described as pre-manufactured construction elements, which isn’t a new concept and doesn’t necessarily require 3-D printing to save time or cut costs. Mighty’s desert house is a kit home, shipped flat and assembled on site — you could order a home from the Sears catalog this way a century ago — and another of its products is an entire dwelling unit shipped to the site complete and hoisted into place. (This can also be done for certain standard components, like bathrooms or kitchens.) That field is also hardly new, although the technology behind it has taken big leaps in the past few years. FullStack Modular has built entire residential towers at its Brooklyn Navy Yard factory, including a 32-story building by SHoP Architects called the “world’s tallest modular building,” and New York’s Public Design Commission is exploring more uses for modular design as a way to save money and keep jobs local. A recent analysis for a project in San Francisco showed that modular housing could cut both the time and the cost roughly in half to build permanent supportive housing, from six years and an average of $700,000 per unit to three years and $383,000.

It’s possible that 3-D printing could revolutionize the speed at which potential housing units are created. A homeowner with a relatively flat, construction-accessible property could hypothetically buy an ADU that’s printed, shipped, installed, and on the rental market within 30 days. That’s the promise of one Mighty structure designed by LA Más that’s currently available as part of Los Angeles’s new approved standard plans program to help homeowners build ADUs in their backyards. The kit-of-parts aspect streamlines approvals and installation, says Elizabeth Timme, principal of LA Más, which manages a separate ADU program that subsidizes some of the costs of ADUs for homeowners who agree to house tenants using Section Eight vouchers. “The biggest challenge we have which can really raise costs is building around an existing structure, the primary home,” she says. “Mighty’s flat-pack system is helpful in eliminating some of the problem-solving we have to do when it comes to building ADUs.” The 3-D-printing process can also easily embed trim and other vernacular details without driving up costs, says Timme. Those decorative flourishes can help buildings fit in, architecturally speaking, and might appease some homeowners who want new buildings to match the aesthetic vibe of existing structures.

But there are better ways to add housing at scale, and do it more sustainably at the same time. “It’s good people are getting interested in this, but it’s not breaking new ground,” says Mark Hogan, principal at the California firm OpenScope, which specializes in ADU and urban-infill developments. What could really transform the entire construction industry, Hogan says, is doing away with panelized plastic altogether and embracing mass timber. This wide range of engineered wood materials like cross-laminated timber, or CLT, use adhesives and laminates to make the world’s most renewable building material so strong that it doesn’t require any steel framing. If U.S. cities started mandating that every ten- or 12-story structure was built out of mass timber, those factories could start mass-producing components for a wide range of building typologies, says Hogan. “What we need is to make sure the building code advances to the point where it will be cost-competitive and give CLT the advantage.”

It’s telling that this 3-D-printed demonstration development in Rancho Mirage is a car-dependent, single-family subdivision in the exurban desert. If the goal here is not just efficiency in construction but also efficiency in all other ways — land use, fuel consumption, emissions reductions — all the new technologies in the world are not going to move the needle on that kind of community very much. What would be truly revolutionary would be figuring out how to use any of these new methods to construct housing more fairly and sustainably in cities, says Roderick Hall, research, planning, and spatial equity project manager at Pacific Urbanism, an L.A.-based group working on housing policy reforms. “If we’re not talking about housing in the context of climate change and environmental justice, and making sure that the decisions we make are not just about cost but also how it benefits the most vulnerable people, then we’ll have a lot more costs in the future for other problems that become too late to solve.” Hall points to a new eight-unit housing development in South L.A., which looks like the same wood-frame-and-stucco bungalow court that’s become ubiquitous across Los Angeles for 100 years. But the project, by Restore Neighborhoods LA, managed to cut the cost of building a new apartment in half — they’re about $225,000 per unit — through a series of creative financing and development decisions, including building no parking spaces in a transit-accessible neighborhood. “They built homes quickly and resisted sprawl,” says Hall. “Now that, to me, is innovative.”

Tags:  how to 3d print cityscape